Allusion and a Fond Farewell


Miss Levin's ninth-graders concluded the year with The Hunger Games by Suzanne Collins and here is a poem one student wrote inspired by this book.


I hear the sleight sound of the symphony bird songs fading


But I don’t know why, but I would find out because the Orchestra was about to start


I fall from my tree I was perched on like a young predator would do
When I land all I can feel is the burning ashes, dig their way into me


It’s devouring my flesh, causing pain runs its way through me


I try to awake from this nightmare but I can’t, this is the Hunger Games, this is real
I run from the hands of the death, trying to fight the pain and anxiety


I can’t give up this easily, I need to fight, for Prim, for myself, for revolt


I take a grasp on the anxiety and hide it for later
I grab my bow and my backpack, dashing through the woods like back home


I look to my side seeing a figure, it’s Gale! He’s here! We’re hunting together
“You can do this Katniss! You’re better than they are!” I hear him whisper


Then I see Gale fade into the flames, He’s given me courage to win
I shake my head trying to make the memories leave but then I see Cinna


He is hugs me, telling me in his soft tone that send chills down my back
“You can win! They love you! Keep the audience hooked”


As the fire plays it tricks on me while I’m running away from the inferno
It has showed me Gale and Cinna, who’s next?


I close my eyes and open them again, Its Prim
Of course it is, why it wouldn’t be, I fall under the flames spell again


I remember I told her I would win for her, and that’s what I plan to do

Well, we all made it to the end of the academic year.
And we'd like to thank you, our readers, for your loyal support.  After all, without you, we would not exist!  Now it's time to celebrate the year and all the ups and downs it has brought our way.
Think of taking the stand and appreciating the good things in life, stopping to smell the roses and never letting the thorns drag you back, as you read this powerful poem, created by Mr. Hepler and Mrs. Vogelsinger's students during a fusion poem activity.  They blended language from poems they found during National Poetry Month to create this fond farewell! And one last thank you to all of our editors for making this year's magazine great!

The Art of Not Giving Up


As the script of life progresses,
Hold fast to your dreams.
Live simply and wisely,
Stay faithful, kind, and true,
And don't lament the things
You will never have,
Control of,
Or do.

Perched on mountaintops,
You gaze down upon the awaiting world below,
Crystal waves crash,
Grandfather trees grow,
And golden grains of sand sparkle,
With infinite possibility and potential.

Step confidently forward, and the road shall rise to meet you.
Even when life is ravaged
By flaming hate,
A single asphalt flower
Shall rise from the ashes. Your love will not die.
Even when you feel like a bird with broken wings,
Don't let your spark go out.

Keep on trying.
Keep on fighting.
Don't forget to LIVE.
Be hopeful, but not oblivious to the future.
Stand your ground,
And take this world by storm.

As the end of the school year approaches, please enjoy the final eighth grade post. In the following poem, Brearly S. presents deep thoughts into the topic of silence.

Blues, greens, teals show
as the sun shines
its bright rays
so quiet, so peaceful

The scene so quiet. The only thing heard
is the soft pitter-patter,
as water hits water.
So quiet as if
in its own bubble with all outside noises
gone.

Even the people who come
make little noise
almost as if they were afraid to disturb it,

As if the whole thing would shatter
with the smallest noise 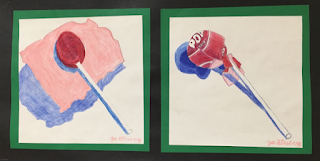