Writing in a setting that is different than the present day can be a challenge for any writer. Enjoy this tale by eighth-grader Gracie H., set in an age of knights, castles, and theives in the forest. 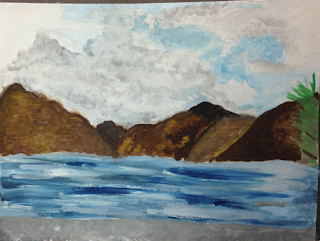 The fog’s smoky tendrils crept out across the worn, dirt path. I watched in silence, as the horse of night rode across the sky. There, I thought, as the queen’s carriage came into my view. The trees whispered as it drew nearer, as if sharing in my excitement. I nock my arrow, and pull back the bowstring. Breathing slowly, I focus on my target, the wheels of the rolling carriage before me. I let go. My aim is true, for the arrow gets caught in the wheel and forces it to halt. The soldiers come around to see the trouble; meanwhile, I slip into the carriage, unseen by the guards. I snatch the chest of gold they were to bring to the palace, and vanish into the woods, never to be seen.


The news of my thieving soon made its way to the castle:


“Your Highness,” exclaimed a messenger, his hat flew off his head as he hurried into the throne room, “The soldiers sent to collect the gold from the town have returned with nothing but an empty carriage. A thief is running about I tell you! A thief!”


The queen whirled around, her eyes flaming in outrage. “What?” she shrieked, “How could you have let this happen. That was hundreds in gold and silver, and you just give it away? Something must be done.” The queen paced the stone floor.


He asked, “Your Majesty, what do you suggest I do? We have no way of knowing who could have done this.”


The queen smiled wickedly. “Then send a skilled hunter into the forest,” she ordered. “He is to bring this gold thief before me.”


The messenger made his way outside to the courtyard. There the soldiers were gathered, speaking amongst themselves. The messenger cleared his throat, “Her majesty wishes to send a hunter to catch the thief who has been ambushing the carriages,” he announced. “You,” the messenger pointed to the closest soldier, “Go into town and find a man capable of doing such a job.” The soldier nodded and rode off on his horse.


I was in the tavern when he came for me, the soldier. He sat down at the table and tried to strike up a conversation.


“I have heard that you are an impressive hunter,” he commented. I shrugged. The soldier informed me I was to come to the queen’s castle and perform a task for her. Only an insane man would not do her bidding, for fear of losing his life. Hesitantly, I agreed to leave with him.


The queen’s castle was nothing like I had imagined. Everything seemed dark, gloomy, and ominous. Inside, every wall was a mirror, and candles were the only light. I was taken into a throne room and left to face the queen.


I bowed low, not daring to look her in the eye. “Are you the hunter for whom I have sent?” she asked me, her voice ice-cold.


I affirmed, “I believe so your Majesty. What shall you have me do?”


“I want you to rid me of a thief dwelling in the forest.” She continued, “If you find this being, bring them to my castle. I shall decide their fate.” I froze, fear seized control. My heartbeat sounded loudly in my head; I was surprised she couldn’t hear it.


“Yes, your majesty,” I was finally able to mutter, and left in haste. I made my way to the woods, not knowing where else to go, for I was conflicted.


Throughout that week I remained in the forest. I was not going to turn myself in. Positive she would never find me here, I continued to raid the queen’s carriages. I convinced myself I was safe. Little did I know, during one of these raids, a soldier by the name of Cador saw me escaping into the forest. He recognized my face from when I was at the palace the other day.


Cador rushed to the castle on foot, leaving the damaged carriage behind. He tore into the throne room and told the queen of his discovery.


“I see,” the queen replied after hearing of the news. “Being that you were the man to discover this, I order you to bring this man to me so that he may receive his proper punishment.”


“Of course, your Highness,” Cador answered as he departed from the throne room.


Cador decided to make the trip into the woods once again with a royal carriage, and use it as a lure. I bought it. Hiding amongst the trees, I saw it coming. Once again, I damaged the wheel and went in for the taking. Suddenly, I was on the ground, my hands and feet bound with rope. It tore painfully into my skin. I was lifted by two soldiers and hauled into the carriage. They quickly replaced the wheel and carted me off to the palace.


When we arrived, I was made to bow before the queen. My body trembled as fear raced up my spine. The guards unbound the rope which cut into my wrists. The queen noted my fear, and laughed aloud. “You are nothing,” she hissed into my ear, she paused, “but I have always loved a good show.” The queen spoke to the soldiers as well as to me. “If this man can defeat my best soldier in battle, I shall set him free.”


Stunned, I gazed up to see her looking down upon me, a clever smile on her face. “For now, take him to the dungeon until his battle tomorrow,” she commanded. At that, the guards came and led me to the prison.


If possible, the dungeon would be described as even gloomier than the castle above. The darkness was overwhelming and smelled of death. I was thrown into a cell and left until morning. The only sign of light was the small torch that the soldiers held, which was quickly fading into the distance, bringing my hopes of survival with it. It was then that the cold came. I shivered. My breath snaked upwards and mixed with the air above. I didn’t sleep at all that night, for fear of never waking.


I cannot say exactly when they came for me, but I saw the torch bobbing along in the blackness. I stood up, hopeful. It was the soldiers; they had come to bring me to the battle.


As they unlocked my cell, I asked them, “Who am I to fight?” I got no answer. I assumed they did not know either. When I stepped into the light of the court yard, my eyes stung and watered. I felt as if I was blinded. Moments later it passed. I looked around me. I noted the queen and her guards, with a front row seat, as well as the crowd of her loyal followers in stands behind them.


I zoned out, all of the crowd’s cheering blended together into a confusing roar. The world spun as a wave of dizziness swept over me. I was led over to a table. The guards were oblivious to my condition. On the table, weapons were displayed. I saw a sword and reached for it, my hand closing around the hilt. Turning, I realized who my opponent was: the man who had captured me in the forest, Cador. He too held a sword, which glinted in the sunlight.


It was then the horn sounded, and I found myself in the center of the arena with Cador coming in for the kill. I braced myself. His sword clashed with mine; his weapon was like a viper, lashing out at its prey. I was no expert with a sword, especially compared to him. Panicked, I tried my best to defend myself. His blade gashed my side, and blood started to flow, covering my shirt. I sunk to the ground, breathing painfully. I knew I had been defeated. The crowd cheered; they cared not for my death. I looked up at Cador, the victor. He held up his sword in triumph, celebrating.


I would not let him win. While his back was to me celebrating, I brought myself up with the last of my strength, and plunged my sword forward. He looked at the wound, shocked. The crowd gasped; their hero had been slayed. Cador’s eyes glazed over and he plunged to the ground. I pulled out my sword, his blood on my blade. I looked down at Cador’s dead body, unmoving on the ground. Sick, I turned away. Blood continued to escape from my wound, onto the grass beside me. I collapsed beside Cador’s body on the field exhausted and shaking from fear and pain. Just as I drew my last breath, I saw the queen standing a few steps away. Her eyes held no sympathy, only amusement. The last thing I saw was her smiling face as she applauded my death.